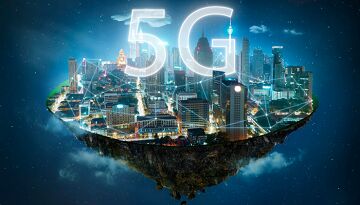 (Note: The following has been submitted as a guest post to CommScope Blogs by Chris Pearson, president of 5G Americas. Opinions and comments provided in this guest post, as with all posts to CommScope Blogs, are that of the author and do not necessarily reflect the views of CommScope.)

We are pleased to report that customers are making 5G the fastest growing generation of cellular wireless technology. According to Omdia, there are now over 17.7 million global 5G connections (as of Q4 2019). This impressive number represents 329% growth over Q3 2019 and is five million subscribers ahead of previous projections.

CLICK TO TWEET: 5G Americas’ Chris Pearson highlights the global growth of 5G and the continued adoption of this cellular wireless technology.

So, how does this compare to the first year of adoption for previous technologies like LTE which reached 5.3 billion connections over a ten-year period? Well, when LTE became commercially available in the last quarter of 2009, it was initially used by only 1,000 customers in Western Europe. North America added 20,000 more LTE customers in 2010, bringing the total to 23,250 connections globally. However, it took approximately 10 quarters (until Q1 2012) for 4G LTE to reach 17.9 million connections – roughly where 5G is today. It should also be noted that 3G did not reach this milestone until December 2010 (after 11 quarters), while it took 2G 14 quarters (December 1995).

So, what accounts for the incredibly rapid growth of 5G? We think it has been fueled by the global deployment of 3GPP-standard commercial 5G networks. In fact, there are now 59 5G commercial networks, a number which is expected to nearly quadruple to 200 by the end of 2020. Looking forward, Omdia projects 5G connections will reach 91 million globally by the end of 2020, of which North America will account for 13.9 million. Latin America and the Caribbean will account for an additional 1.5 million subscribers by the end of the year. At the same time, global 4G LTE connections are expected to reach 5.9 billion, of which 513 million (6.1% annual growth) will originate in North America and 397 million (8.6% annual growth) will come from Latin America and the Caribbean.

In conclusion, the first year of 5G adoption has clearly surpassed most forecasts. We expect 2020 to see the further growth of new 5G devices, increased coverage and network densification, and probably the first 5G Stand Alone deployments.

For more information and to view a variety of statistical charts on the 3GPP family of technologies, and for a list of LTE and 5G deployments by operator, by region visit www.5GAmericas.org.

Chris Pearson is the President of 5G Americas.  In his executive role, he is responsible for the overall planning of the organization and providing management for the integration of strategy and operations in the areas of technology, marketing, public relations and regulatory affairs.  As President of 5G Americas (formerly called 4G Americas), Mr. Pearson represents the organization’s Market Representation Partner interests within the 3rd Generation Partnership Program (3GPP) organization.

Mr. Pearson led the organization from its inception in 2001 as the 3GPP family of technologies market share grew from 10 percent in 2001 to more than 93 percent in North, Central and South America. Mr. Pearson came to the organization from the Universal Wireless Communications Consortium (UWCC) where he served as Executive Vice President in charge of the strategic executive management of the global TDMA wireless technology consortium.  Prior to joining the UWCC, Mr. Pearson held several senior technical and marketing positions at AT&T Wireless and GTE.

With more than 30 years of experience in the telecommunications industry, Mr. Pearson is a recognized spokesperson in mobile wireless and 5G technology trends and has spoken at technology conferences throughout the world including CES, Mobile World Congress, CTIA Super Mobility, LTE World, 5G World North America, and 5G Forum USA.

Mr. Pearson earned a Master of Business Administration degree from The Albers School of Business and Economics at Seattle University and a Bachelor of Arts degree with emphasis in Marketing and Finance from the University of Washington.

Entertainment Studios’ selected CommScope’s software to power its comedy festival fundraiser that provided millions of meals to families affected by COVID-19 across the country. Dave Charlton explains in this blog.